Community that moves with you

The Back on My Feet community wouldn’t exist without our incredibly dedicated volunteers, like Kate. From Philadelphia to New York City, her Back on My Feet teammates have been like family to her.

Kate shares in this interview about her volunteer experience and what Back on My Feet means to her:

How did you find Back on My Feet? 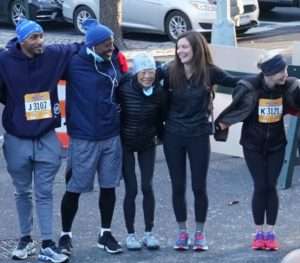 I relocated to Philadelphia for work and didn’t know a soul in the city. I mentioned to one of my roommates that I was interested in volunteering locally to get involved in the community and get to know the city better. His friend and I got to talking about running one night and he had a close friend who worked at Back on My Feet (BoMF) and had only great things to say about it. I googled it, signed up for an orientation and the rest is history!

SO COLD (and dark!). I started in Philadelphia February of 2014 in the middle of one of the coldest and snowiest winters I can remember. I had no idea no idea what to expect, but after arriving at Gaudenzia House of Passage in West Philly at 515AM, I was greeted by a circle of friendly people extending hugs to everyone who walked up to the group.

The enthusiasm was overwhelming in the best way. And I was so impressed by the embracing of the serenity prayer. After a few weeks of morning runs, I was hooked.

What keeps you running?

After several weeks of running consistently with inspiring members and volunteers, I had to leave Philly for a trip and missed several morning runs back to back. It took me until then to realize how much better and happier my days with runs were – and how empty my mornings felt not having BoMF circle-ups.

Surrounding yourself with positive, inspiring people at such an early hour really gets my day off to the best start.

I’m also grateful to the BoMF community because when I was so new to Philadelphia, both the volunteers and members took me in and treated me like family!

What is (or one of) your favorite Back on My Feet memory?

I don’t have one specific memory as a favorite – there are too many to count! My best memories though overall have been watching members from Team HOP (Philly) and City Hall (NYC) complete their first marathons. Close seconds are Saturday marathon training runs in New York and Sunrise weekday runs over the Brooklyn Bridge.

What is one thing you’ve learned during your time as a  volunteer?

Everyone has a story worth listening to – and most of the time it’s not what you might expect!

What makes the Back on My Feet community special to you?

There’s nothing like it. It’s the perfect combination of so many different things that I love – inspiring people, running, and community. Over the years I realized that in the BoMF community, there is unspoken support, a level of caring, and trust that both volunteers and members have for each other. Long runs, in particular, lend for ample time to share stories and get to know one another. It’s incredible how close you can become with people who are “strangers” on just one long run.

What would you tell someone who is thinking about volunteering with Back on My Feet?

Do it! The dark, cold and early mornings may seem rough at times. But, that all disappears almost instantly as everyone comes out to circle up for a run.

Be patient and commit to showing up to several runs.  Over time, you will start to see how amazing the friendships and connections are that you’ve made. It happens without you realizing it!

The positive energy also lends for the perfect start to a day.

Join a Back on My Feet team in your city!

Check out other ways you can get involved.

Support the growing Back on My Feet community.