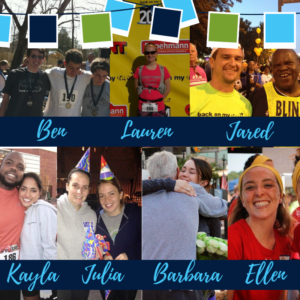 In honor of Back on My Feet Baltimore’s 10th birthday, we are featuring 10 unique stories leading up to the big day. Today, we have a very special Q&A with our past interns! These remarkable humans have led to the true success that we have today at our 10th year in Baltimore. Check out where they are today in the world!

— Ben started working with BoMF way back in 2009 when we first arrived in Baltimore. He became a Program Intern during the summer of 2014 after seeing a summer intern tweet, and has now volunteered and worked with Back on My Feet for almost ten years now!

Ben currently teaches American History at a middle school in Baltimore County. He stays involved with BoMF by volunteering and occasionally coming to morning runs. His birthday wish for BoMF is continued success for the organization, as well as the members and staff. “I’ve seen the impact this incredible group has on its members and even its volunteers. The work BoMF does is truly inspiring and rare. Running on its own can change a person. Running with BoMF members takes that to an entirely new level.”

Ben would like to thank “Jackie Range and her husband Patrick for their continued support over the years. I can’t believe it’s been a decade since I showed up as a goofy fourteen-year old for my first run with BoMF. I would also like to pay homage to my mentor Mitch Liebeskind who passed away last year.”

— Lauren joined as a Back on My Feet volunteer in early 2009 after a Baltimore Sun article about Back on My Feet caught her mom’s eye. Soon thereafter she became an intern and coordinator for an additional 4 years with us!

Lauren still runs and lives in Baltimore City. Since interning with Back on My Feet, she has attended and graduated from the University of Baltimore School of Law, worked for the state and federal judiciaries, and started her career at Gordon Feinblatt LLC, a civil law firm in downtown Baltimore City comprised of a collection of legal boutiques.

Her birthday wish for Back on My Feet is healthy miles run with teammates in fair running weather on the way to achieving many running and personal milestones! And a personal best or two!

— Jared started running with the group in 2011 and started as an intern in August of 2013 and interned for two years. He joined not long after moving to the Federal Hill neighborhood after seeing the program featured a year or so before in Runner’s World and loved the idea that running could empower folks to improve their lives.

Jared is about to expect his first child and is living his last few weeks as a city and Locust Point resident. “The experience I gained during my internship helped propel me into my first marketing job and is one of the pivotal moments in me being able to change into a career that I so dearly love.”

His birthday wish for us is to continue to be amazing and grow. “While the group seems to continue to grow their running presence in Baltimore, it’s the lives they’re continuing to change that still resonates with me. Don’t ever stop growing, but also don’t forget those roots.”

— Kayla joined Back on My Feet in 2010 after her mom encouraged her to get involved. The team became family since day one. From there, she decided to intern one summer in 2013 and has done extraordinary things since.

“I’m currently in Phoenix, AZ pursuing a degree in naturopathic medicine with a focus in mental health and addiction. Moving away from Baltimore, although temporarily, has been one of the most challenging adjustments of my life because of the impact BoMF had. Living in a city without a chapter has truly taught me what those 5 am wake-up calls meant in terms of making me the person I am today. So although I am not able to run with BoMF in person these days, it continues to be one of the reasons I get up every morning and put on my running shoes and keep pushing forward when it gets tough. My involvement with BoMF today may not look exactly like it used to, but the work I am doing here is, on a larger scale, so that I can continue to serve communities under the same principles I learned during my years with BoMF.”

Her birthday wish is for each person involved with BoMF is for them to know that they should never underestimate the incredible impact they have on the people around them.

— Julia joined our team as the Events Intern in 2015-2016 after moving to Baltimore and looking to find a new way to get involved in her community. Today, she is the Program Manager for Best Buddies International and is a part-time graduate student at the University of Maryland, working towards her Masters in Community Planning.

Her birthday wish for Back on My Feet is that she hopes this will provide an opportunity for community members, past and present to come together and celebrate the growth that has taken place since 2009. “Back on My Feet now has a tremendous impact not only on the Baltimore community, but across the nation and this anniversary is a significant moment to recognize just how strong the BoMF community is.” And, of course, her favorite birthday gift was Avril Lavigne’s Let Go album.

— Barbara kicked off her tenure with Back on My Feet Baltimore in January of 2016 as the program intern, and eventually transitioned into the Program Coordinator position the following fall. Now, she is a 2017 corps member for Teach for America Memphis. She serves as a case manager, special education teacher, soccer coach, and advocate at Bolton High School, one of the oldest academic institutions in the region. And while she is without a Back on My Feet chapter in Memphis, she stays connected every which way possible.

Her birthday wish for Back on My Feet Baltimore is for the program to continue expanding its overall impact on the community, and for it to never stray from its most valuable ingredient: empathy.

— Ellen came on board as the Development and Marketing Intern from January 2017 until April 2018, after first hearing about Back on My Feet while living in Copenhagen. Yes – Ellen heard about BoMF first while she was studying abroad and was googling ways to get involved back hom in Baltimore. “Joining Back on My Feet was the BEST choice I could’ve made, and it was by far the most extraordinary thing I was involved in during my time in school.”

Ellen graduated from Loyola Maryland and moved to Massachusetts where she currently works as an editor for a medical publisher. She still makes it down to Baltimore once in a while, and when she does, she laces up her sneaks and join Team HUM for an early morning run. She also has been part of the Back on My Feet charity team for the Baltimore Running Festival for the last two years and she looks forward to toeing the line with her favorite people for the half marathon again this year!

Her wish for Back on My Feet is “even bigger circles, even more miles, and never-ending hugs.”

Share your talents and skills with the Back on My Feet community. Get involved with us!