Preparing for a marathon is not an easy task. Back on My Feet volunteer, Julie Price is no stranger to the process leading up to the big race.

Julie has participated in four marathons in the past, and is gearing up for the Berlin Marathon. She shared her experiences with running marathons, volunteering with Back on My Feet and some of her best FundRacing tips.

Finding Back On My Feet

Julie discovered Back on My Feet in an article in Runner’s World magazine. A long-time runner herself, she fiercely believed the sport could positively impact people beyond their athletic goals.

“I see how my dedication to running spills over into other parts of my life; the commitment, the sense of achievement, and the desire to keep going even when I don’t want to.”

She began running with Back on My Feet after moving to Los Angeles. Concerned with the large population of people experiencing homelessness, Julie wanted to do something hands-on to help. “The sense of community and normalcy that people get through going on the morning run a few days a week and having conversations… it seemed like such an important effect that could help people feel a lot more comfortable with the rest of society.”

After doing many smaller races, Julie was dared by a friend to try a marathon. 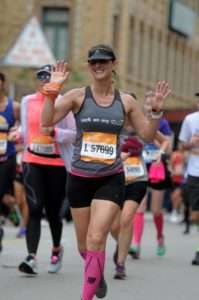 “I do marathons because it pushes my boundaries. It’s really hard for me, and I think it gives me some sense of self satisfaction that I can push myself beyond what I think I’m capable of doing.”

Julie remembered her toughest race experience, when she took part in the New York City Marathon. While training for months, she had been plagued with multiple injuries, but decided she still wanted to complete the race. That day, after running several miles, she was experiencing so much pain, she had to severely slow her pace.

“I ended up walking basically the last nine miles of the New York City Marathon…I thought about quitting almost the whole time.” She continued to push through her discomfort to the end.

As she approached the finish line, she remembered staff was already beginning to take down the banners and move the running barriers. Despite her long race time, she saw her close friend waiting for her at the end.

“He stuck it out, and waited for me and cheered me on. It was a super emotional moment”. She believes each race has been completely unique and special, which encourages her to keep signing up for them.

Leading up to the Berlin marathon, Julie joined another running group in Denver, and spends training time talking to fellow runners about Back on My Feet, “I’ve recruited a few board members that way.” She has also been active in the launch of the new Denver chapter, and is doing her part in leading new volunteers as the co-chair or the Associate Board.

Julie’s fundraising goal for this race is $3,600 (she is just $10 away!), enough to support two members through the program for a year. Having FundRaced for Back on My Feet many times before, she gets creative in order to encourage her friends and followers to keep donating.

“I use my network; I use social media as much as possible, and send personal emails.” When people donate, she always follows up with a thank-you. “I also tend to tie it to an event, like on my birthday last year, I sent an email to everybody.” Instead of gifts, she asked her friends to give to her donation goals.

Above all, Julie believes in the power of educating people on the impact of their participation. “I try to get people to understand what great work this organization does, and why it’s so important to me. That usually translates pretty nicely into people being willing to help out with whatever they can.”

Thanks to Julie for her ongoing support of Back on My Feet! Good luck to our team running the Berlin Marathon!

Learn more about fundraising with Back on My Feet!

Join a Back on My Feet community near you!