Nonprofit Helps the Homeless Change Their Lives by Starting to Run 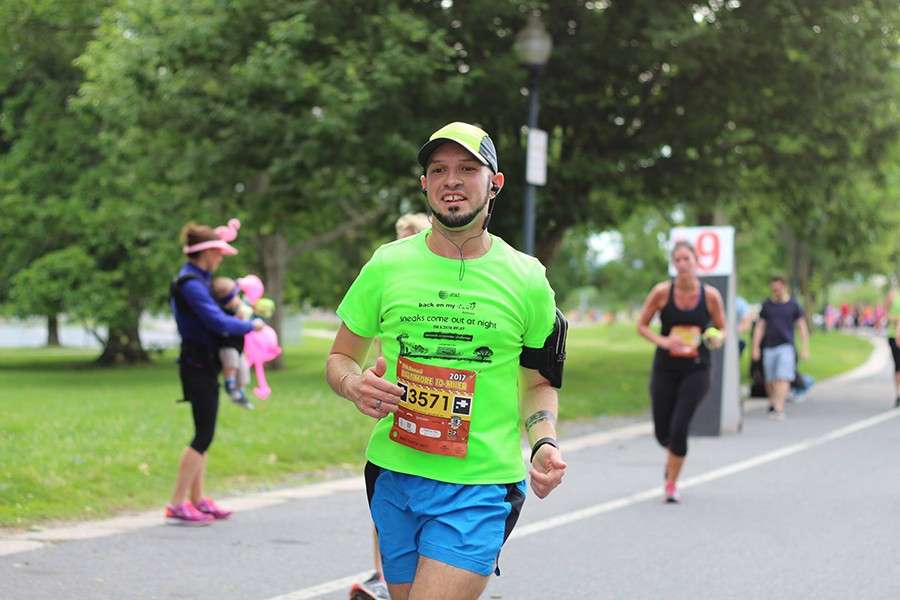 A little over four years ago, David Doxzen, 28, could have never imagined preparing for his first Boston Marathon. Deep in the throes of addiction, he found himself homeless, without a job, and checking into a 12-step program. Doxzen, a resident of Baltimore, began his road to recovery at Helping Up Mission, a homeless shelter in Baltimore, where the employees encouraged him to join a program called Back on My Feet. What began as an excuse to get a free pair of shoes quickly turned into an opportunity that completely transformed his life—all he had to do was put one foot in front of the other.

Back on My Feet, a national organization operating in 12 major cities, including Boston, seeks to change the way society addresses homelessness through a unique running-based model.

The program has two phases. It starts with a 30-day program where members are asked to commit to running three days a week in the early morning. The second phase is called Next Steps and is only available to members with a 90 percent attendance rate during the first phase. According to their website, almost 80 percent of individuals who start the program move on to Next Steps, where they develop job skills and are given financial assistance and networking opportunities. More than 5,500 jobs and homes have been attained by members by the end of the program, and within six months of becoming a Back on My Feet Alumnus, 90 percent of members maintain their employment, 60 percent receive a wage increase and 20 percent achieve a promotion, according to the organization.

“Joining Back on My Feet was a great milestone in my road to recovery,” Doxzen says. “I had no prior running experience and never considered myself athletic, but I took a leap of faith and before I knew it, I loved it and was signing up for optional long runs on the weekend.”

At the end of 2014, Doxzen had completed his first half-marathon and came back the following year to run his first full marathon, both in Baltimore. “I had nowhere to go but up,” Doxzen says. “Back on My Feet showed me that if you show up and run and communicate with others, so many doors will open up for you.”

Now, as an alumnus of the program, Doxzen is putting his college degree to use in a position he never thought possible, with a global investment management firm, and secured a Boston Marathon bib by fundraising over $7,500 for the organization that gave him so much.

“The Boston Marathon will be marathon number five for me,” he says. “The fundraising alone was a huge challenge and has taught me so much. Running marathons is many things, but it’s exciting to see all your hard work come together on race day.”

Even more impressive, Doxzen will be the only Back on My Feet member or alumnus running in Boston—which came as a surprise to him, but is a testament to all the hard work he has put into not only running but setting his life on the right track. He may be running alone, but the organization has a huge Boston chapter, and many participants from Back on My Feet will be there cheering him on.

“You can’t stop before the miracle happens,” Doxzen says. “You can always be trained to succeed at anything and Back on My Feet can help.”