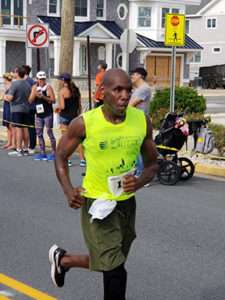 Several months ago, when Back on My Feet first asked Willie to lead the warm up routine at Workout Wednesday (a chapter-wide workout every third Wednesday of the month) he was hesitant. The large group can be very overwhelming, especially for someone more reserved and quiet in nature, like WIllie. It wasn’t until some of his teammates clapped and cheered him on that Willie finally “nodded” and made his way to the center of the extra-wide circle that morning.

Since then, Back on My Feet counts on Willie to lead warm-ups at Workout Wednesdays and races with confidence. His voice echoes throughout the city and captures the attention of even those outside of Back on My Feet. It’s not unusual for strangers to feel inclined to hop right into his routine. In these moments, Willie shines. He is in his element. A leader.

It’s hard to believe that just a little over a year ago, Willie was in a completely different place in life. “I had a miserable existence. I didn’t know what it meant to live.”

Suffering from both drug and alcohol addictions, Willie spent much of his time in and out of homelessness and jail. After taking bad drugs, he checked himself into the hospital and agreed to go to rehab. When he arrived at the rehab facility, he asked himself, “What will be different this time? Am I going to make it?”

One of the significant differences this time around was an experience he had during his first week at Ready, Willing, and Able, a transitional facility and working program for men. “I remember seeing all of these folks that I knew weren’t in the program. They were so festive, and friendly, and it was so early in the morning!”

Willie was intrigued by the excitement and camaraderie of the group, which he quickly learned was Back on My Feet. As a self-declared early bird and fitness enthusiast, he felt an immediate connection to the organization and decided to sign up for the early morning runs.

“Just the name, period. It let me know that Back on My Feet is a program for people like myself or anybody, really, who has had setbacks and looking to get help in life.”

That was 10 months ago. Since joining Back on My Feet, Willie has achieved many things he never thought possible. Just this year alone, he ran the Broad Street Run, the Philadelphia Marathon, and countless other races. He keeps every medal, race shirt, and bib as tokens of his accomplishments.

Willie also just celebrated one year clean and sober. “I’ve learned that it’s never too late to keep reaching for as far as I can reach. I am not limited in anyway, and life is really worth living,” Willie shares how Back on My Feet has influenced his outlook on recovery and life.

Recently, Willie has been taking advantage of every opportunity he has with Back on My Feet including the Financial Literacy and Tools for Success workshops. In the short term, he’s working on finding employment with one of that will allow him to become stable in his self-sufficiency.

One day, Willie hopes to become a personal trainer and help people in a meaningful way, similar to how the Back on My Feet community has helped him. “I appreciate Back on My Feet and all the help I’m getting. For the first time in a very long time, I’m truly encouraged and hopeful.”

What to learn about more of our amazing members? Check out our more Success Stories, or make the jump and support more members like Willie!