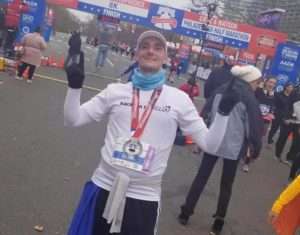 Mike came from a good background. Growing up in Bucks County with his mother and step-dad the future looked bright. He graduated from Valley Forge Military Academy with high hopes of a career.

During his formative years, Mike’s brother Christopher James (CJ), was his father figure. “I looked at him as my hero.” At age 16, CJ was in several car accidents that lead him into deep addiction. Consequently, Mike watched his role model struggle with drugs. “I was his sidekick. Right next to him. It was only a matter of time before what CJ did, I would do.”

At 19 years old, CJ became incarcerated. Mike was only 14. After losing his brother to the criminal justice system, Mike also turned to drugs. When CJ went away, Mike’s life launched into a spiral of partying. Being high was an escape. It felt good.

By 18, Mike was trying everything. He partied until he was 25 years old when he suddenly took a moment to look around. All of his friends were buying homes, getting married and having kids. Finally, he was ready to try and get clean.

The first chance at a career

Mike’s mom told him that if he was serious about his recovery, she would be there to support him. If he was willing to commit to a real recovery program, she would help him find work. She made good on her promise.

After sixty days working hard at his program, Mike left the Kirkbride Recovery Program in good standing. With the help of his mother, he entered into the Steam Fitters Union and for the first time in his life, felt a passion for a career.

Relapse as a part of recovery

In 2013, As a romantic relationship in Mike’s life ended, he found himself slipping back into old habits. As a result, he became laid off and had to leave the union. Mike shared,

“Relapse is a part of recovery. Addiction Is cunning. It will sneak right up on you and get you when you least expect it. But people make mistakes and you get up and you keep coming back. People who are champions at what they do are champions because they get up a million times.”

During his downspin in 2018, Mike was pulled over and received a DUI. Locked up for 14 days, something clicked in his mind. It was time to get back up.

As soon as he was released from jail, Mike checked himself back into the Kirkbride Center. He was in it for the long haul. From June – October of 2018, Mike worked hard as a part of the long-term inpatient recovery program at Kirkbride. And that is where he found Back on My Feet.

From the first moment with Back on My Feet, Mike could see the genuineness of the community. “I wasn’t used to that. When you’re in your addiction, people wear masks. They’re frauds. You don’t know who everyone is. But when you go to Back on My Feet, you get a completely different vibe. […] People were just real. And I think I fell in love with that.” When people asked how he was doing, it was because they really wanted to know.

Everything that Back on My Feet talked to Mike about, they delivered on. As he dove deeper into the program, Mike achieved so many new things. Races, education, and more. In 2018, he ran the Dietz and Watson Philadelphia Half Marathon. When he told CJ and his family he was running it, they did not believe him. Mike says “it was one of the greatest moments of my life”.

A Career with passion and purpose

Today, Back on My Feet is helping Mike to complete the Philadelphia Training and Technical Institute Program and get back to welding. He graduates in May and some days he stays at school long beyond the end of the day because of how much he enjoys it.

Mike takes pride in where he is in his life today. “To see your mom and sister crying because you are finally achieving something is priceless. You can’t replace the irreplaceable.”

Give to help members, like Mike, get another chance at a career, join a team, or get involved with a Back on My Feet chapter near you.