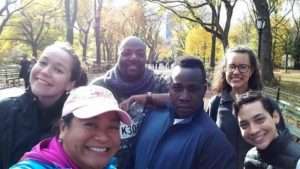 Dexter joined Back on My Feet last October, but his journey started long before he joined us at that first morning circle.

Dexter was born and raised in Guyana. He grew up with his family in a small town, but unfortunately at an early age, he was forced to move into the city and break his strong family ties. In Guyana, Dexter suffered persecution because he was gay. This persecution wasn’t just in the form of being turned away by his family but was creating a very dangerous situation for Dexter in all areas of his life. Eventually he decided that while Guyana was home, it wasn’t safe for him anymore and he needed to leave and seek asylum elsewhere. “I came to America because I wanted to be safe and free.”

Dexter had a friend in New York City who helped him find a room for rent and a nice job at a Brooklyn bakery. As he was settling in this new city, Dexter had gotten connected to a lawyer who was willing to do some pro bono work and support him throughout the process of applying for asylum. Everything seemed to be coming together, until he got hurt at work. He was no longer able to work at the bakery and without a steady paycheck, lost his room. 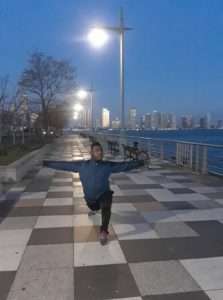 Before he knew it, Dexter found himself without a job, without a place to stay, and still working through the process to be granted asylum. Luckily, Dexter found his way to the New York City Rescue Mission. He kept seeing a group of residents running in the early morning and one day, after coming in with a big smile and excited to start his day, BoMF Alumnus, Hector, noticed Dexter watching and told him he should join! Dexter figured it was something to do so he signed up that day.

“The best thing that ever happened to me was finding Back on My Feet.” One of the most vivid memories of Dexter’s life was made on the morning of his first BoMF run as he was immediately taken aback by the early morning hugs. “To have someone embrace me without judgement was amazing. These Back on My Feet hugs were the first time I ever knew tolerance.” Dexter quickly became an active member and found running with BoMF to be therapeutic in a way for him. “I was pretty depressed while I was living in the shelter. Running became healing. It helped me to shed burdens, torments, and intolerance that I’d carried my whole life.” Running helped Dexter feel not only liberated but safe, his team became his family. “I liked the environment and loved the people.” 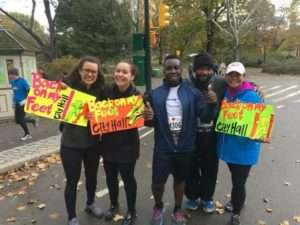 In December it was time for Dexter to move out of the shelter and he was looking forward to supporting himself again, but, as many do when moving in New York City, he found himself in the situation of having only 8 days to move out and into his new apartment. Dexter turned to Back on My Feet for help. “Back on My Feet financial aid helped me with my moving costs and helped to make the move a reality for me… I felt so happy to move out to an apartment of my own.”

Even though Dexter had moved out and become an alumni member, he still came out for morning runs, and of course for hugs, whenever possible. Dexter recently felt a draw to his home country when his mom passed away on a Tuesday in January. While him and his mom weren’t on the best terms when he left his old country, it still pained him to know he couldn’t go home to grieve with his family due to the asylum process. “The first call I made was to Back on My Feet. My mom died on a Tuesday and on Wednesday I came out to circle up with my team. My teammates comforted me, and I felt relief. We all had a moment of silence for her at our team meeting… they are truly a family to me.” This family is something Dexter truly treasures and spreads the message of whenever he gets the chance. “I’ve never experienced a community like I have at Back on My Feet.”

Dexter’s newfound community isn’t the only thing he’s taking away from Back on My Feet. At the Next Steps Workshops, Dexter took away many important lessons, the most impactful for him being the ones he learned at the TD Bank Financial Literacy Training. “It set the tone for me. It’s expensive to live in NYC… you need to budget. With the skills I learned I was able to start saving and opened a bank account.” Thanks to his budget, he can do things he loves. He is passionate about music and recently celebrated his progress with saving with a visit the Lincoln Center.

Even as Dexter is making new memories on his own, he still thinks back on his inspirational Back on My Feet teammates. BoMF volunteers showed Dexter how much of a difference an individual has the potential to make. After learning from their generosity of time and service, Dexter feels drawn to service himself. “I want to serve these places that I was able to be lifted out of. This is a country that changes people and gives you a new outlook on life, now I want to dedicate my life to serving it.” Dexter has started checking off his goals on the path to living a life of service with his new dream of becoming a Paramedic. While working at a Jamaican restaurant, Dexter is going to school for his EMT certification, already FEMA and CPR certified, he is excited for this next step.

Dexter is embracing all that life has to offer him. He is inspired by his Back on My Feet teammates and volunteers and decided to give back in his off time as well. He joined his church’s choir, became a part of the Caribbean Equality Project, and is always ready to help out a friend or teammate when needed.

Recently granted his asylum, Dexter, now with restored status and on track to becoming a Paramedic, feels like the sky’s the limit…

“Back on My Feet has worked for me in every single way. Apart from running and apart from the love, they truly help you get back on your feet. Because of BoMF I am turning my own key and doing so much!”