Several months ago Christophe Cadiou set out to enter the 2019 Virgin Money London Marathon. It was on the marathon’s charity partner webpage where he came across Back on My Feet. According to Christophe, “It was literally a perfect fit. Combining a cause with running really appealed to me. Having a greater purpose in running makes the effort much more personal.” 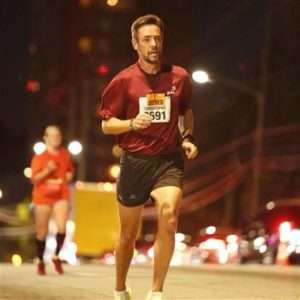 Joining the Back on My Feet Circle

He reached out to Back on My Feet to inquire about running the London Marathon for the organization. Also learning there is a Back on My Feet community in Atlanta, where he resides.

To Christophe’s surprise, he had actually already crossed paths with Back on My Feet.

After getting connected in Atlanta, he discovered that he likely received a finishers medal at the Kaiser Permanente Corporate Run/Walk from a Back on My Feet member. Christophe was a Team Captain for PricewaterhouseCoopers (PwC) for the event in 2018, while Back on My Feet volunteered at the finish line.

Turns out Back on My Feet found Christophe. He has been running with Team Gateway in Atlanta twice a week ever since.

Consistently showing up to run with members has helped me earn their trust and learn their stories. It’s also a great feeling to witness someone who maybe started out walking only a mile or two, but eventually is running three miles. You get to see their progress and how it makes them feel better about themselves.

Christophe’s weekly dedication to Back on My Feet alone is admirable, especially considering his grueling travel schedule as a PwC Partner. But it’s his commitment to raising $7,500 and easily surpassing it that’s astonishing. Within days, Christophe’s donations far exceeded his fundraising goal and quickly multiplied to over $21,000.

What’s his secret? “After posting my fundraising information on LinkedIn, I also sent literally hundreds of emails through my Back on My Feet fundracing page with personalized individual notes included with each one.”

Perhaps even more surprising is he actually enjoyed writing all those emails, “It was a wonderful opportunity to reconnect with people I lost contact with over the years.” He was blown away by the responses he received from his network. Many of his peers took the time to write back and include $25 up to $1,000 donations.

Christophe credits his fundraising success to people valuing his effort to personalize each ask. In addition to the appeal of helping those who are trying to help themselves overcome homelessness. He also says he benefited from timing. Christophe created his fundraising page just before Thanksgiving when people generally feel a greater desire to give.

Running marathons is not new to Christophe. The Virgin Money London Marathon will be his twenty-second! His first was the Paris Marathon in 2004. Since then, he runs one or two a year unless sidelined due to injury. His average finish time is 3 hours 12 minutes, with a personal best of 2 hours 58 minutes.

Depending on where he’s running and what food is available, his typical pre-marathon meal usually consists of: coffee, a banana, yogurt, a bagel with jam and water mixed with Carbo Pro. He also follows a standard routine of preparing his clothes and race bag the night before. This allows him to arrive at least an hour before his start time, so he has time to warm up and stretch prior to each race.

In addition to the London Marathon in April, Christophe participated in the Asheville Marathon in March as a training run. He’s also running the Berlin Marathon in Germany this September, which will be his final run to complete all the Abbott World Marathon Majors.

Upon finishing Berlin, Christophe will become one of the celebrated marathoners to earn a  Six Star Finisher Medal . The medal signifies the completion of the world’s largest marathons. That includes: New York City, Boston, Chicago, Tokyo, London and Berlin.

Support Back on My Feet’s London Marathoners!

Run a World Marathon Major with Back on My Feet.

Get involved with Back on My Feet in your city!