Trevis grew up with his family in Atlanta. He has fond memories of living there with them and has thoughts of moving back every now and then. However, one thing Trevis certainly does not regret was his decision years ago to pack up and follow his dreams by moving to the Big Apple.

Trevis has been a makeup and brow artist since 2003. When he first moved to New York, he was prepared to do what it takes to make it. Trevis 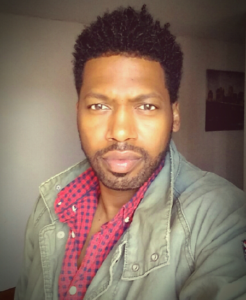 quickly showed his skill and moved up the ranks of cosmetology working at Bergdorf Goodman, with celebrity clientele at Warren Tricomi salon and doing make up for Spike TV on the side. He loved the hustle and felt motivated to work harder.

Suddenly, Trevis’ life shook when he learned that his brother passed away. Instead of giving himself the time to process his emotions, Trevis threw himself into work even more. When work no longer distracted him, Trevis started smoking to cope. “I started being late to things and even missing them. It became a habit to be late and it really caught up to me.”

Trevis, who was once able to balance a seemingly impossible number of things, was no longer able to keep his schedule under control. The more he felt out of control and anxious, the more he smoked as a means of coping. “Anytime I would sit down to deal with anything, it would turn into smoking.” As his busy schedule started falling apart, Trevis too began to fall apart and his whole life was spiraling with it.

Running out of options

In 2013 Trevis was getting by working on commercials but mentally and emotionally struggled. He had just gone through a breakup and found himself living on the streets for a couple of weeks. Trevis started going to Bowery Mission, a Back on My Feet facility partner, for lunch and learned about their services. For a while, he thought the Bowery could be a solution but was quickly distracted by another odd job.

Trevis would pick up small jobs, but nothing was ever consistent.  “I felt like I was going in circles.” One day on his way back to New York after doing makeup for a wedding in Atlanta, Trevis found himself down on his luck again. “I wasn’t paying attention and got off the bus a stop early. When the bus drove away, I realized I left all my makeup and supplies on the bus. I lost everything.” His dreams seemed to be slipping away.

So, Trevis hopped on one last bus straight to the Bowery Mission. It’s a decision he is still thankful for to this day.

Getting back on track

Trevis remembered hearing something about a group of guys running the first time he was at the Bowery Mission, but never inquired to learn more. That group was Back on My Feet. He figured since he was staying longer this time, he would see what the program had to offer.

Trevis was surprised to find that Back on My Feet is so much greater than an early morning workout. “It’s not just about running, it’s more.” Being a part of Back on My Feet keeps him disciplined. The morning runs energize him and increase his productivity all day long.“I never want to wake up, but when I get outside we’re laughing and joking,  getting up is never a burden.”

Trevis found that with this positive start, he was more effective throughout the day. Additionally, with Back on My Feet, he could be proactive about his future dreams by taking advantage of workforce development programming. After attending Back on My Feet’s LinkedIn workshop, Trevis discovered a new way to interact with potential employers and clients. As Trevis dove deeper into Back on My Feet employment workshops and goal setting with Program staff, a passion of his reemerged.

Making his dreams a reality

As he achieves new goals in running, Trevis is also finding success in following his dreams. With the help of Back on My Feet financial aid, he is going to school to become a certified brow artist. “With my license to do brows I will be set up for sustainable income and be able to be independent.”

For years I kept saying ‘I can’t,’ but Back on My Feet financial aid opened me up to the opportunity of saying ‘I can!’”

Trevis is looking forward to what his education will bring him. He set goals to rebuild his clientele in New York and hopes to start his own brow line one day. “I remember hearing stories from family members who gave up their dreams. This always worried me.” Now, that worry has turned into motivation to go after his dreams with full force, thanks to Back on My Feet.

From running over the Randall’s Island bridge to becoming a certified brow artist, Trevis is ready to replace the “I can’t” in his vocabulary with “I can” in every aspect of his life.

Donate to support the dreams of members like Trevis, join us for a morning run, or get involved in so many other ways!